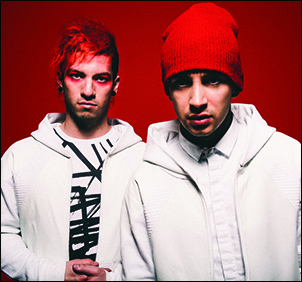 The “EMØTIØNAL RØADSHØW” tour, which follows last year’s sold out “BLURRYFACE TOUR” – will officially get underway May 31st at Cincinnati, OH’s US Bank Arena and then travel North America through two nights of sold out shows at New York City’s Madison Square Garden on August 10th and 11th. Tickets for all 48 North American tour dates are sold out, including Los Angeles, CA’s The Forum which sold-out within one hour, as well as two-night-stands at Agganis Arena, Red Rocks Amphitheatre, and The Greek Theatre. The band, who only just finished topping Australia’s annual six-date traveling festival event, Groovin’ The Moo, will then cross the Atlantic to finish up their summer at England’s one and only Reading/Leeds Festival.

The success of “Ride” follows Twenty One Pilots’ RIAA 2x platinum certified, “Stressed Out,” which spent three months at #1 at Modern Rock while also topping the charts at CHR/Top 40 and Hot AC. The track, which recently received the iHeartRadio Music Award for “Alternative Rock Song of the Year” has proven a true multi-format phenomenon, reaching #2 on Billboard’s “Hot 100” while ascending to the pinnacle position at CHR/Top 40, Hot AC, and Alternative.


“BLURRYFACE”, which also includes the RIAA gold certified single, “Tear In My Heart”, made a chart debut upon its 2015 release, entering the SoundScan/Billboard 200 at #1 with total sales exceeding 147,000. The album further served as the duo’s international breakthrough, reaching the top 5 in Canada as well as the top 20 in Australia, Ireland, New Zealand, and the United Kingdom. Furthermore, Twenty One Pilots’ Tyler Joseph stands as the #1 songwriter in the first quarter of 2016 on the strength “Stressed Out,” while “Stressed Out” became the first song penned by a single writer to top the Pop charts in nearly two years. “BLURRYFACE” follows Twenty One Pilots’ 2013 Fueled By Ramen debut album, “VESSEL,” certified gold by the RIAA and a trio of gold certified hit singles in “Holding On To You,” “Car Radio” and “House of Gold.”