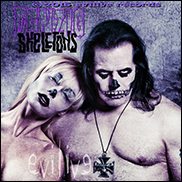 MONTREAL (CelebrityAccess) — Former Misfit Glenn Danzig has announced that after completing a series of scheduled shows, he plans to retire from regular touring.

In an interview with Loudwire, the frontman of the eponymously-named band said: “I think this is going to be it. I’ll do some shows here or there, but I don’t think I’m going to tour anymore.

“We might do some Danzig legacy things, but they’ll be very intimate,” he adds. “Same thing if I do the Danzig Sings Elvis record — I want it to be more intimate where people can sit down and just watch the show. … I know there are a couple of plans to go overseas and do some things there, but it will probably just be festivals.”

The news of his retirement comes after reports of the notoriously camera shy performer allegedly assaulting a man who took photos during the a concert in Montreal. In a video of the show posted by TMZ, Danzig snatches what appears to be a phone away from someone in the audience and tosses it away. Then, outside, the phone's owner, a man identified as Neil Dalton, is seen talking to Danzig briefly before being grappled in a headlock by the artist and his security team.

"So I went to Danzig last night. Including the 100 dollars I spent on his merch plus the tickets time of work and traveling to Montreal to see him this is the price you pay for taking a photo of Danzig," Dalton posted on Facebook page along with a bloody photo of his injuries. The page has since become unavailable.

According to multiple news outlets, a criminal complaint was filed with the Montreal Police, who were reported to be investigating, but we could not confirm that at the time of publication. – Staff Writers