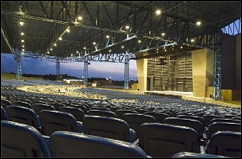 (CelebrityAccess MediaWire) — Only weeks after facing some tough deficits due to Hurricane Rita, Ford Park in Beaumont, Texas, has been on the rebound following a payment from FEMA, a nationally televised wresting event, and a series of high-profile upcoming events.

Jefferson County officials have already received more than $200,000 in reimbursement for the park’s use as a shelter during the hurricanes, and expects another $1.06 million to come their way by early April. A contract with the General Services Administration and the Federal Emergency Management Agency is currently in negotiations.

Allan Vella, GM of the SMG-managed park, told the Beaumont Enterprise that the payments are vastly improving the park’s financial situation.

“This will cover expenses and allow the park to make a little money as well, with benefits the county, offsetting losses,” he said.

Upcoming events at the facility are also expected to greatly help the bottom line. The WWE has decided to nationally televise a RAW wrestling event that had to be rescheduled from an early-September hurricane-season date, helping to show the Park is back in its original glory.

Ticket sales have been much better than expected as well, due to upcoming shows by gospel singer Kirk Franklin and country legends George Jones and Merle Haggard, as well as an always-popular monster truck rally. –by CelebrityAccess Staff Writers