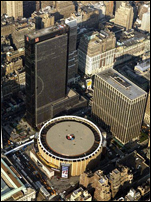 (CelebrityAccess MediaWire) — Cablevision Systems Corp. has reportedly signed a memorandum of understanding to build a new Madison Square Garden one block west of its current location, as part of the James A. Farley Post Office renovation.

Sources familiar to the negotiations told Crain Communications of the deal, which would include demolition of the current Garden, situated above Penn Station, to make way for a m ixed-use tower and restorations to the aging commuter hub.

The news service reports that The Related Cos. Brokered the deal by smoothing over hard feelings remaining from the West Side stadium fight between the Bloomberg administration and Cablevision executive and chairman of the Garden, James Dolan.

Related Cos. And Vornado Realty Trust are under a state contract to renovate the Farley Post Office. The Garden deal stalled in early January when Cablevision held out for better financial terms according to Crain.

It isn’t clear whether the Garden will keep a city property tax break that MSG receives at its current site, equaling more than $10 million annually, originally set by Mayor Ed Koch to prevent the Knicks and Rangers from leaving town.

The new Garden plans will take up the western half of the $556 million Farley renovation, space that was originally designated for office and retail development. The eastern half of the project will be redeveloped as the Moynihan Station transit hub. –by CelebrityAccess Staff Writers