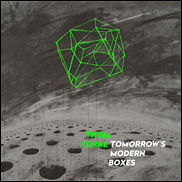 SAN FRANCISCO(Hypebot) – Thom Yorke, famed early adopter, dropped an alpha-stage BitTorrent Bundle with some free stuff and some stuff you pay for. The new part was that instead of trading an email address for the stuff that wasn't free you now pay real money for it. What's the big deal? With BitTorrent Bundles, BitTorrent, the company, has created direct access for all sorts of artists to a large community that uses the BitTorrent protocol and includes a significant portion that spend money on music. Not only that, but BitTorrent intends to seek RIAA certification so that sales count on the charts. It's all win.

Thom Yorke's release of "Tomorrow's Modern Boxes" via a BitTorrent Bundle and a deluxe vinyl edition seems to have stirred up lots of interest.

The joint statement from Thom Yorke and Nigel Godrich is pretty basic. Here's how I'd put it:
There's a new form of BitTorrent Bundle with a payment feature.

It allows DIY artists to go D2F bypassing the traditional "gate-keepers" of the music industry.

Thom's trying it out as an "experiment" to see if the public will respond."

What's cool is that [except for the obvious media frenzy] the same "self-contained embeddable shop front" that we're using is the same tech everybody else can use.

Having reworded it to say pretty much the same thing, I can see now why people are so worked up. But enough dry humor. Have you checked out "Tomorrow’s Modern Boxes"?

The release of "Tomorrow's Modern Boxes" is an awesome campaign for the new BitTorrent Bundle with the ability to sell stuff. BitTorrent Bundles have already proven themselves as marketing tools and Thom Yorke will be a great test case for sales.

If a significant level of sales occur, which I think is likely for releases like Yorke's, publishers will eventually be able to adopt these bundles for all sorts of digital content including more album releases. And with BitTorrent seeking or planning to seek RIAA certification those sales can count on the charts.

In addition, BitTorrent's new Bundles are coming to all platforms including iOS once things get a bit further.

So BitTorrent seems to be developing a quite viable ecommerce option for musicians. Plus they've got that music-buying audience you may not be able to otherwise reach so easily.

As BitTorrent's Matt Mason pointed out to Rolling Stone:

""The difference between BitTorrent and every other direct-to-fan service is [that] we have a truly global audience that we can put Bundles in front of,' he said, asserting that by reaching 170 million people each month, BitTorrent has a base larger than twice the combined audience of BandCamp, Spotify, Netflix and Hulu. 'We have one of the largest user bases in the history of the internet.'"