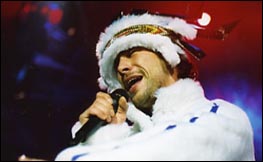 MUNICH (CelebrityAccess MediaWire) — Jamiroquai will perform a record-breaking concert onboard a Boeing 757 – at 35,000 feet. The band will play the 'Gig In The Sky' on February 27.

Lead singer Jay Kay said "No one's ever done a gig like this before. Rock 'n' roll is all about pushing the boundaries and 'Gig In The Sky' certainly does that."

While onboard the specially modified plane (seats will be ripped out and a special stage built) they will perform hits including Cosmic Girl and their latest release Runaway for the so-called Gig in the Sky.

With this event, Sony Ericsson said “they are taking the music experience to a whole new level."

Just 200 special guests will be on the plane but after touching down at the secret location the band will perform again for 700 fans in the airport terminal.

To prove that they have performed at record-breaking heights an official adjudicator from the Guinness Book of Records will be onboard to judge the event.