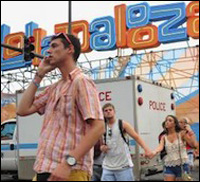 Israel will join Chile and Brazil as the third international location for the legendary festival, in addition to the US festival in Chicago.

Lollapalooza is being brought to Israel by NMC United, a prominent home entertainment and music distributor and publisher in Israel, and Plug Productions Generator, a leading production and promotion company.

“Israel is an incredibly sophisticated music market,” says Marc Geiger of WME Entertainment, a partner of Lollapalooza, LLC. “Consumers have a voracious appetite for entertainment, yet there has never been a major music festival. To me, this combination screams Lollapalooza.”

Lollapalooza Israel will be the first-ever large-scale international music festival in the country and will provide the same world-class experience that fans across the globe have come to expect, beginning with the location. The festival will take place just a few minutes from vibrant downtown Tel Aviv, in The Yarkon Park, which stretches for hundreds of acres along the Yarkon River and is the largest and most popular park in Israel. Tel Aviv is widely recognized as an international culture capitol and is known across the world for its art, architecture, and bustling nightlife.

The latest installment is an exciting personal and professional turn for Lollapalooza founder and Jane’s Addiction Frontman, Perry Farrell, who has seen his invention touch the lives of music-lovers around the world.

“Lollapalooza began as music’s premier traveling festival,” says Farrell. “As a musician, I really missed the days when we were on the move. In the last few years we’ve widened our scope, presenting Lolla to the ‘festival generation’ around the world. Next stop- Tel Aviv.”

The festival is certainly on the move, but diversity, musical discovery, food, the arts, and sustainability will move with it as Lollapalooza makes its home in Tel Aviv.