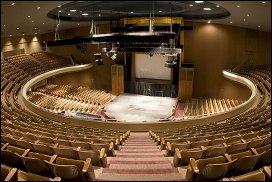 The center is owned by the Masons of California and managed by Live Nation.

Plans to renovate the 1950s venue were approved in May and include replacing seats with a standing area, widening the stage and constructing a new bar and concession areas.

The planned overhaul would provide San Francisco with a concert venue to rival the Fox Theater in Oakland.

Approval only occurred after a heated four-hour hearing by the Board of Supervisors, which imposed stringent conditions on behalf of neighbors who said they were worried about traffic, noise and drunkards according to the San Francisco Examiner.

One condition would limit capacity to 3,300 patrons — roughly the same number allowed inside today. Another would limit evening performances to 85 a year.

Those conditions, however, were not strict enough for some neighbors, who filed two Superior Court lawsuits against the project, and plan to file a third according to the San Francisco Examiner.

Among other things, the neighbors allege The City failed to properly analyze the effects on the neighborhood. “We as residents always knew we stood little chance of winning in City Hall,” neighbor David Harmer said. “The plan from the get-go was to take this to the courts of law, where we fight a legal battle — not a political battle,” as reported to the San Francisco Examiner.

Live Nation is delaying its renovation plans until the litigation is resolved, which could take a year or more.“We’ll just wait for the outcome,” Live Nation San Francisco Chairman Lee Smith said according to the San Francisco Examiner.

For now, the venue is a sitting duck, forgoing the normal season packed with college graduations due to planned construction activity to begin in June.

Only one event, a Gypsy Kings gig, is booked between now and September 8th according to the San Francisco Examiner. –by CelebrityAccess Staff Writers