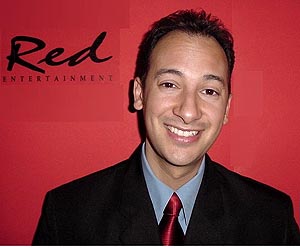 "Red Entertainment is looking to be more than just a booking agency," Keyes told CelebrityAccess. "In my
experience, bookings are not only a way to keep artists performing but also a great tool to market and develop an artist. If you are involved in the management and development of an artist, when you link these together, you will get more for an artist.

Keyes says that Red Entertainment will be expanding and adding other agents and managers to achieve these goals.

Keyes, former president of American Talent Agency, also worked at Pyramid
Entertainment and Artists & Audience. He can be reached at 212-582-4500 or carloskeyes@redentertainment.com

Jamie Adler has left Artists Worldwide and joined the Agency Group in Los Angeles, bringing Motorhead and Dennis Quaid & The Sharks. He can be reached at jamie.a@theagencygroup.com.

Angelo, who at the time of her departure did not plan to remain in the agency business, told CelebrityAccess that she decided to continue after Suicidal Tendencies
asked her to continue working with them. Angelo is working at CEG two days a week, giving her time to pursue other interests.

During the span of her booking career, Angelo has been at ATI, ICM QBQ, Mustang Booking (her own agency) and A&A.

Brian Swanson has sold his Hello! Booking agency and will join Monterey Peninsula Artists on March 12. Swanson will bring along Clem Snide and Puffy AmiYumi. All the other artists will remain at Hello! Booking. Swanson sold the agency to his business partner of the last five years, Eric Roberts, who will add new agent, Steve Brown, to take over his Western U.S. territory.

"A few weeks ago I accepted an offer to join Monterey Peninsula Artists in Monterey, CA., " Swanson tells CelebrityAccess. "I'm very excited about this new opportunity and know that it's going to be a great move for me and my family."

Based in Burlington, Vermont, Baggot has a history of developing emerging talent (Disco
Biscuits, Sector 9, The Recipe) and had his own agency, thebookingagency.com for
the past six years. "This new affiliation allows me to keep my key clients while taking
a big step forward by joining Skyline's great team and rapidly expanding
roster," states Baggott.