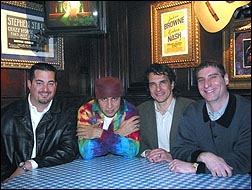 Van Zandt, who also appears on the hit cable series, "The Sopranos," will host the
weekly, two-hour radio program that will showcase the evolution of the Garage Rock
sound. The show will air Sunday evenings at 10:00 pm on most classic rock stations
(time and day may vary from market to market) in top markets across the
country.

For its launch event Hard Rock is transforming the New York Cafe into a
retro-60's motif; replete with go-go girls dancing atop six-foot pillars
costumed in mini-skirts and tie-dye shirts. Hard Rock will also bring in
special key items of 60's rock memorabilia.

"Hard Rock Cafe is the perfect partner for this radio show," said Van Zandt. "No one
stands for a great cutting-edge entertainment experience more
than Hard Rock, one of the greatest music brands in the world. Garage Rock is music
for older people with young spirits and young people with old souls. It's a certain
sensibility that you have when you're 17 or when you're 67. It never goes away."