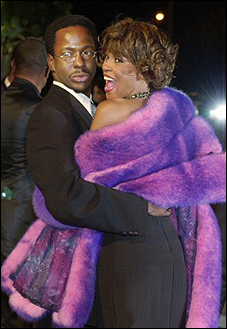 albums worldwide, to his Bad Boy Records, the New York-based label Combs founded eight years ago and which boasts artists such as Dream, Notorious B.I.G., P. Diddy, Faith Evans and 112 on its roster.

Under the agreement, Bad Boy will distribute New Edition's next album, due out in the spring of 2003, featuring a reunited lineup that includes Ricky Bell, Michael Bivins, Ronnie DeVoe, Johnny Gill and Ralph Tresvant –all platinum selling artists in their own right.

New Edition set the foundation for all pop and R&B that exists today with such hits in the 80's as "Candy Girl," and "Mr. Telephone Man." They are responsible for laying much of the groundwork for the fusion of R&B and hip-hop. As solo acts, Ralph Tresvant, Johnny Gill, Bobby Brown and Bell Biv DeVoe dominated the charts. Together, they sold more than 31 million albums, both as solo acts and as members of New Edition.

"New Edition carved the path for what we know to be R & B today and are living legends," says Combs. "I look forward to working with all the members closely on their new album and reintroducing the world to a brand new New Edition. This new collaboration will inevitably make music history."

"We are thrilled to be working with Diddy on the next phase of our career and look forward to bringing new music and a fresh sound to our fans," said New Edition.

New Edition will enter the studio shortly to begin recording. The new album will be produced by Combs, his stable of hit makers, the Hit Men, and select guest producers such as Jimmy Jam and Terry Lewis. New Edition will serve as executive producer.

The former teen group has been signed to Sean "P. Diddy" Combs' Bad Boy Records. They're set to deliver a new disc by next spring, the same year they'll celebrate the 20th anniversary of the release of their first album.

However, Bobby Brown, one of the group's most famous members, won't be part of the reunion. Instead, the disc will feature Ralph Tresvant, Michael Bivins, Ricky Bell, Ronnie DeVoe and Johnny Gill, who replaced Brown when he left in 1987.

"New Edition carved the path for what we know to be R&B today," Combs said Monday. "I look forward to working with all the members closely on their new album and reintroducing the world to a brand-new New Edition."

The quintet performed together on a reunion tour this year.