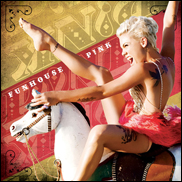 LOS ANGELES (CelebrityAccess MediaWire) — Having smashed touring and sales records through Europe and Australia, international sensation P!nk is bringing her dazzling Funhouse Tour to the US this fall. The arena tour will kick off September 15th in Seattle and stop in San Jose, Houston, Phoenix, and Fairfax (on sale date to be announced soon). Additional dates will also be announced shortly. This is P!nk's first US tour since 2006.

With mind-blowing acrobatics, an incredible band and dancers flying above the fans, the Funhouse Tour is a show stopping spectacular has to be seen to be believed. P!nk consistently delivers an impressive and powerful performance, astounding audiences with her phenomenal stage presence that has critics searching for new superlatives. The show is packed with hits including the emotionally charged "Who Knew," "Sober" and classic track "Get The Party Started" together with songs from P!nk's latest platinum selling album, Funhouse. With over 4 million albums sold worldwide, this is one of the biggest selling albums of the year and boasts P!nk's first US #1 Billboard single for "So What" and current single "Please Don't Leave Me."

The Funhouse Tour has broken records abroad as P!nk has become the biggest solo touring artists ever in Australia, selling out a whopping 58 arena shows. Sales of the European leg of the tour have surpassed 1 million tickets sold with 28 sold out arena shows in Germany as well as five sold out dates at London's O2 Arena.

Preview the tour and hear P!nk talk about the shows and life on the road:

"A Pink show is more than just a pop concert – it's a major spectacle that you can't take your eyes off. The show was simply mesmerising." – Aberdeen Evening Express (UK)

"Pink can rock it, that's for sure. She has the anthems, the voice and the sass…4 stars" – The Glasgow Herald (UK)

"A dramatic feast for the eyes and ears.." – Birmingham Mail (UK)

"It would be difficult to find a better pop show than Pink's." – The Times(Of London)

"Headfirst she gets lifted towards the ceiling, flies over the audience, and the American sings with a quality that some of her colleagues wouldn't be able to hold, even when they were just standing." – Rheinische Post(Germany)