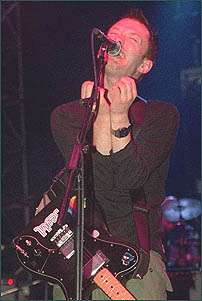 A joint statement released by promoters Michael Chugg Entertainment and Radiohead’s manager says Yorke developed a "significant loss of vocal quality" during the band’s first Melbourne show on Monday (April 26) and was "barely able to finish the concert.".

At the show the previous night, the singer had apologised to the crowd, and said they had also considered pulling that gig.

The statement reads: "This morning he was attended by a Melbourne ear nose and throat specialist who diagnosed Thom with marked hoarseness of voice, a significant upper airway infection and associated heavy inflammation of his vocal chords. It was advised that if Thom was to sing in the next few days it could cause irreparable damage to his voice. Consequently and regrettably tonight’s concert had to be cancelled.

"Thom and the band would like to apologise to all of their fans, they are aware that people have travelled from all over the country for tonight’s show and would like everybody to know that this decision was not taken lightly.

"The band want to thank all of their Australian fans for their support at this time."

Promoter Michael Chugg told radio station Triple J that Yorke has been put on antibiotics to assist with his recovery in time for the band’s appearance at the Coachella festival in California this coming weekend.

Radiohead had already completed two dates in Sydney last Friday and Saturday (April 23-24) as part of the final leg for the promotional tour in support of the release of last year’s ‘Hail To The Thief’.

While there is no news as to whether the band will reschedule the show at a later date, fans have been advised they can receive a refund for tickets from point of purchase.