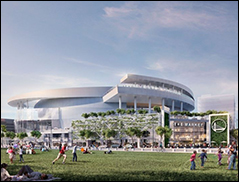 SAN FRANCISCO (CelebrityAccess) — The Golden State Warriors have moved a step closer to a new home in San Francisco after the city's Board of Supervisors voted in favor of building a new arena in the city.

“This new, privately financed, state-of-the-art Golden State Warriors event center rounds out Mission Bay as an incredible and diverse ecosystem of technology, health care, science and, now, entertainment,” Lee said. “The Warriors are inspiring a new generation of fans throughout the Bay Area. I can't wait to welcome them home to San Francisco.”

According to SF Gate, the new 18,500-seat Mission Bay arena will cost an estimated $1 billion to construct. While the arena itself will be privately financed, the city also moved to establish a transportation fund to pay for $55 million in transit infrastructure, including four new light-rail vehicles, upgraded Muni power, new signals and signage and an expanded T-Third line platform to support the arena.

“This is the culmination of four years of hard work by our city and community partners,” Warriors President Rick Welts said in a statement. “The Warriors are excited and ready to build this new, state-of-the-art arena in San Francisco that’s worthy of our championship team and our world-class city and region.” – Staff Writers