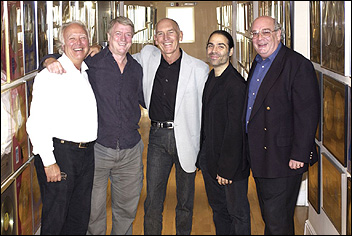 Some of the highlights in recorded music included Kiss, whose double album ‘Alive IV’ shipped gold in the US. The DVD was number one in the US and went double platinum in December 2003. There were also strong sales in the US for the new album by Lynyrd Skynyrd whilst The Libertines ’debut album ‘Up The Bracket’ has sold over 170,000 copies worldwide to date.

In artist management, Iron Maiden played to over a million people across Europe as part of their most successful year ever, and Led Zeppelin’s live DVD became the best selling music DVD of all time. New managers were attracted bringing with them acts such as Mick Fleetwood, Manic Street Preachers, Groove Armada and The Von Bondies.

In the best year ever for live music, Sanctuary was involved in some 7,000 shows across Europe, Asia and Australasia for acts including Dido, Robbie Williams, The Darkness, Red Hot Chili Peppers and Coldplay from their agency roster of over 350 acts. Merchandising also benefited from this increase in live activity representing Eminem, Christina Aguilera, Bon Jovi, Robbie Williams and others.

Post year-end, Sanctuary completed fund raising of up to £30 million, through the issue of convertible loan notes and warrants, to support the Group’s strategic growth.

“I am very pleased to be able to report such strong results which, once again, justify our belief that music in all forms is as popular as ever and that, globally, people will continue to consume and pay for high quality music," said Andy Taylor, executive chairman. "Live performance continues to be a key driver in the success of an artist’s career, and each year brings evermore innovative ways for artists to create revenue from their music, through merchandising, ringtones, downloads and sponsorship: our 360 degree music business model, which gives us exposure to all of these key areas, represents the key to Sanctuary’s continuing prosperity."

"The past few years have seen significant changes in the global music industry and this evolution has created a short period of unprecedented opportunities for Sanctuary to acquire competitively valued, high quality assets," added Taylor "We firmly believe that, through the funds we have recently raised, it is in the best interests of our shareholders for us to take selective advantage of some of these excellent opportunities. It is this strategy that will deliver high quality earnings and enhance cash and capital returns in the medium term.” –Jane Cohen and Bob Grossweiner