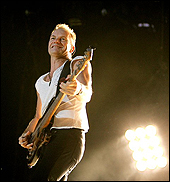 BOSTON (CelebrityAccess MediaWire) — Ticketmaster may have killed the business of a few scalpers and legitimate ticket resellers for last week’s Police concert at Fenway Park in Boston, by releasing a cache of last-minute tickets to the sold out shows just days before the band took the stage.

Ticketmaster’s additional tickets diluted the need for a secondhand ticket market, and below-face-value prices began appearing on Craigslist, eBay and other sites almost immediately. Some were merely looking to trade the concert tickets for regular Red Sox tickets, according to the Boston Herald.

Unlike previous Fenway concerts by the Rolling Stones and Bruce Springsteen, fans were able to still get tickets off of Ticketmaster for nearly all sections, except for the lowest priced seats and front and center seats.

The paper reported that one day before the show, bidding on eBay for prime seating was still nearly $70 below face, while earlier in the week, prior to the Ticketmaster announcement, one customer shelled out $900 for a pair of similar tickets. –by CelebrityAccess Staff Writers