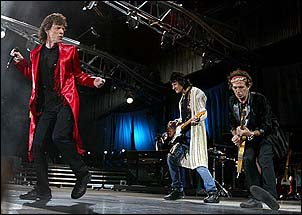 The Rolling Stones will perform at the 60th birthday of Texas billionaire David Bonderman. He was so determined to have the Stones play at his party in Las Vegas that he has offered them $7 million for the night, the New York Daily News claims. "This was one offer they could not refuse," said a source close to the rockers.

NEW YORK (AP) — The Rolling Stones have agreed to give their first live concert for an American television network, a show that will air on HBO in January.

The pay cable network will present the Stones at Madison Square Garden in New York City on Jan. 18, one of the last stops on their "Licks" tour.

The concert deal was announced Wednesday.

NASHVILLE, TN (AP) — Mel Tillis says he's going to begin touring again beginning next year. This after a 45-year career that has yielded more than 60 albums.

Tillis, 70, is already on the road with a few dates scheduled through October. And he recently sold his theater in Branson.

Tillis has earned nine No. 1 singles and 36 Top Ten singles. He also has a CMA Entertainer Of the Year trophy and received honors as the BMI Songwriter Of The Decade. He has been inducted into the Nashville Songwriters International Hall Of Fame.

The company arranging Tillis' solo concerts will also be booking the upcoming Pam Tillis/Mel Tillis package tour. The tour is in support of Pam's new album "It's All Relative," a tribute to her father. In the album, she sings many of he father's hits. The album, released on Sept. 3, features duets with her father, Dolly Parton, Emmylou Harris, Trisha Yearwood, the Jordanaires, Delbert McClinton and Marty Stuart.

Meanwhile, Pam Tillis has signed to play 90 shows at Yakov Smirnoff's theater next year in Branson. Tillis will alternate with Smirnoff's "What a Country" performance, playing matinee and evening dates in June, July, August, November and December.

Tillis said she's sentimental about appearing in Smirnoff's 1,400-seat theater because it's the first venue her father played when he came to Branson in 1990.

The singer admitted she didn't think much of the town on her first visit. She was driving on a rural road and had to brake to avoid hitting a turkey. "I thought that dad had lost his mind," she said.

Dave Koz will head back on the road for what will be his sixth annual A Smooth Jazz Christmas Tour, joined again by David Benoit, Rick Braun, Brenda Russell and Peter White, beginning December 3.

"I am so excited to have everyone back from last year," said Koz. "We will do some new stuff and bring back some old favorites as well. With the show now in its sixth year, we have become some sort of a family and I really like it. We just go ahead and do it and have a good time."

Koz continues to be the morning show host for Los Angeles' KTWV (The Wave), one of the leading "Smooth Jazz" radio stations in the United States as well as continuing "The
Dave Koz Radio Show", which syndicated to over 100 U.S. and international affiliates.