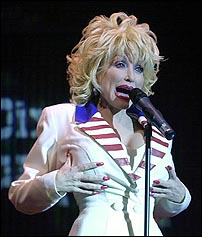 "We are thrilled to be in Orlando," Parton said. "Our show brings family fun that harkens back to my childhood, and the food is as good as the entertainment. We will be Orlando's most fun place to eat. I guarantee it!"

The attraction is the largest of four Dixie Stampede Dinner & Shows with a 128,000-square-foot arena and seating for 1,200. Appealing to crowds of all ages, the show is a blend of fast-paced acrobatic horsemanship, memorable special effects and a swirl of Americana-styled music and songs personally written by Dolly Parton.

Orlando is the latest in the line of Dolly Parton's popular Dixie Stampede Dinner & Shows. The original Pigeon Forge show venue opened in 1988, near Dolly's own theme park — Dollywood. The company opened its second location in Myrtle Beach, SC in 1992, and its third location in Branson, MO in 1995.

More than 280 shows will be performed the new $28 million, 128,000-square-foot facility in Orlando in the first year. On many days, there will be multiple shows. The general admission price — $43.99 for adults and $28.99 for children ages 3 to 11, plus sales tax — includes the Carriage Room show, the main show and a four-course feast. — edited by Bob Grossweiner and Jane Cohen

Planet Hollywood Hotel and Casino to Open in Las Vegas

The joint venture partnership purchasing the property includes Robert Earl, founder and CEO of Planet Hollywood International, Inc., Bay Harbour Management LC and Starwood Hotels and Resorts Worldwide, Inc. The purchase agreement for the 2,567-room hotel, 114,000 square feet casino and the 7,000-seat Theatre of Performing Arts is $635 million and includes the assumption of debt. New capital investments of $90 million will be used for property renovations and re-theming.

Upon completion of the renovation, the new resort will be known as the "Planet Hollywood Hotel & Casino," a Sheraton Hotel. The Casino floor will be entirely renovated giving it a more open feel with a distinctly Hollywood theme, as well as new entryways.

"Plans for a Planet Hollywood Hotel and Casino in Las Vegas have been in the works for years," said Earl. "I am thrilled that we have been able to put together the team, and the plan, to make it happen at this incredible location on The Strip. The time is right, the Planet Hollywood brand is back on the upswing, and there is no better place to start our hotel and casino business than here, today, in Las Vegas."

The Joint Venture has appointed Mike Mecca to be its president and CEO. Mr. Mecca, formerly the general manager of the Green Valley Ranch Casino and Spa, joined the group in May.

The Hollywood theme will be reflected in the design of new rooms and suites for the hotel. Drawing from Planet Hollywood's extensive memorabilia collection, the largest in the world, the specialty suites will be a completely unique element of the new design. The top floor of the hotel will be the celebrity suites floor, reflecting the lives, and careers of some of our most beloved movie stars. The next floor down is devoted to the movies; specialty suites on this floor will be themed with memorabilia from top grossing films. Plans also call for major headline acts to rotate through the Theatre for Performing Arts. The Theatre will also be home to weekly Hollywood-style movie premieres.

Under the deal, the Aladdin Resort & Casino will continue to operate as the Aladdin for a period of time. During that time, the property will make a gradual transition into Planet Hollywood Hotel and Casino, with major renovations to the existing property. –edited by Bob Grossweiner and Jane Cohen

(CelebrityAccess News Service) — Michael Meyers is the new general manager of Global Spectrum's Greater Richmond Convention Center. Meyers, a 21-year industry veteran, will oversee all of the day-to-day operations of the facility, as well as book, schedule and solicit for exhibitors, trade shows, conventions, meetings and other forms of business for the newly renovated facility. Meyers was previously the president of the Wisconsin Exposition Center in West Allis, WI. Prior to that he spent six years with the Lansing (MI) Entertainment and Public Facilities Authority where he was executive vice president. — edited by Jane Cohen and Bob Grossweiner

(CelebrityAccess News Service) — After two years, the struggling weekly summer concert series at the MGM Grand Detroit Casino has been pink-slipped. Concerts were held under an outdoor tent with a 1,200-person capacity.

"If the traffic that you drive and the cost that it takes to do it make no sense, then you look at a different program," said John Redmond, chief executive officer of MGM Grand Resorts in Las Vegas, in The Detroit News.

Unpredictable weather, inability to recoup artist booking fees and bidding wars were all factors in the decision to pull the concert series. Other nearby venues included DTE Energy Music Theatre in Clarkston, Freedom Hill Amphitheater in Sterling Heights and Soaring Eagle Casino & Resort in Mt. Pleasant.

(CelebrityAccess News Service) — Venerable promoter Larry Magid 's 421 Willow Corp. has filed for Chapter 11 protection in US Bankruptcy Court in Philadelphia on June 10, the Philadelphia Business Journal reports. According to the paper, Magid, who owns the Electric Factory club, filed in an apparent move to delay legal action that could force the club out of its building.

According to the paper, the dispute dates back to February 2000, when Electric Factory Concerts was sold to SFX Entertainment, now Clear Channel Entertainment. According to court documents obtained by the paper, at that time, SFX agreed to manage and operate the club, taking in "no less than 50 percent of the annual net income."

The paper reports that, according to court documents, 421 Willow tried to reassign its lease to SFX as part of that transaction, while holding onto the concert hall. However, the landlord states that 421 Willow did not have that authority.

Electric Factory's attorney, Albert A. Ciardi III, told the paper, "It was a move to protect the business, protect the company and protect the creditors," he said. He also noted that the club has no plans to close. "The club will continue to offer performances."

In the filing, 421 Willow cited debts of $500,000 to $1 million and 50 to 99 creditors, including performers Tracy Chapman, Peter Frampton, Justin Timberlake, Train and Gov't Mule, reports the paper. — edited by Jane Cohen and Bob Grossweiner