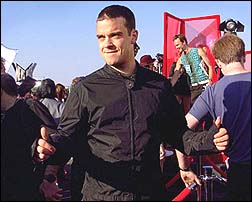 Williams, who is currently trying to crack the US music market, will perform at a free show on Friday in the city's Battery Park.

Williams' last album did not make as much of an impact on the US charts as had been hoped, but he is aiming to build his profile there.

The singer is also to appear as a guest on the Jay Leno show on 12 May, and he recorded the theme tune to hit spy spoof Johnny English, which has been a global success.

Last year's musical event at the Tribeca festival climaxed with an outdoor show by David Bowie in front of 10,000 fans.