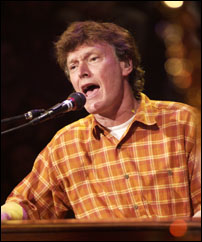 (CelebrityAccess News Service) — Steve Winwood will receive a Lifetime Achievement Award at the 2004 Jammy Awards on March 16 at the Roseland Ballroom in New York. Winwood and his current band, with whom he recently recorded the critically acclaimed 2003 release About Time (Wincraft Music), will perform at the awards ceremony.

Previous recipients of the Lifetime Achievement Award are B.B. King, The Meters and The Grateful Dead.

“It is an honor to be chosen to receive a Jammy Award,” Winwood comments. “There are so few opportunities to publicly recognize improvisational music. This is a great community of musicians and fans and I look forward to being there.”

The album’s first radio single, “Different Light,” has also been nominated for the 2004 Jammy Song of the Year.

One day earlier on March 15, Winwood and his former band Traffic will be inducted into the Rock & Roll Hall of Fame the Waldorf – Astoria Hotel. It will be the first time since 1967 that Winwood and his old Traffic bandmates will perform together.

Winwood, Jim Capaldi, and Dave Mason will all be at the event, in addition to the late Chris Wood’s sister Stephanie, who will receive the induction on behalf of her brother. Randall Bramlett will sit in for Wood. Bramlett played with Traffic in their 1994 line-up and has long been a member of Winwood’s band.

“Sadly Chris is no longer with us, but in fact Randall has always been very sensitive to Chris’ style of playing and has done a great job performing the Traffic songs," says Winwood. "In fact, Chris’ sister gave Randall Chris’ flute.”

The original members of Traffic first came together in 1967 with the concept that they would live together and write songs. “The musical concept,” Winwood explains, ”was to combine various forms of ethnic and rock music together with classical, folk and jazz. We hoped to form a music that was peculiar to us. We rented a cottage in Berkshire far enough away from neighbors so that we could play at any hour and not disturb anyone. Many people used to come to the cottage and hang out…Eric Clapton, Stephen Stills, Lyon Russell, etc.”

The news of Traffic’s induction into the Rock & Roll Hall of Fame came as a nice surprise for Winwood. “Traffic has given much pleasure to many people over the years,” he comments. “There were many musicians who played with Traffic over the years, including Reebob Kuaku Baah, Rick Gretch, Jim Gordon, Roger Hawkins, David Hood, Barry Beckott, Rosco Gee, Randall Bramlett, Mike McEvoy and Walfredo Reyes. I am very happy for everyone who is associated with this remarkable band. I am honored for Traffic’s induction into the Rock & Roll Hall of Fame, and I'm very grateful to the powers that be for including the band as part of this prestigious institution." –Bob Grossweiner and Jane Cohen