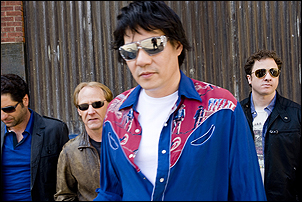 BOULDER, CO (CelebrityAccess MediaWire) — Over the past twenty-five years since

landscape of the recording industry with integrity and grace. Always looking to

satisfy their own musical desires, Mohr and company have held tightly to their

singer-songwriter ethics. With their latest album Rocksteady featuring a

Caribbean influenced sound, the band is seeing a rejuvenation of their career

with the widely played single “Beautiful.” Mohr takes a moment off from touring

to discuss the band’s history, his fascination with rock and roll as an art form,

and the future of The Monsters.


Just this past June the band played their annual show at Red Rocks, this time

of the album’s release.

Did you prepare any differently for that show?

Actually, quite a number of those songs we play pretty consistently, but there

were probably three or four that we haven’t played in about twenty years. I kind

of went back and relearned some material and revisited that album, which I was a

little bit surprised by. It’s always kind of interesting looking into yourself.

I could barely play guitar and sing in tune at the time. (Laughs) I think was

probably twenty-one years old when we recorded that album.

Because it was a live album, it was pretty easy pickings, I think, for us to

present it well. It was a fulfilling moment to play it live for everybody and I

think it was a really successful show. We started the show by pulling out our '77 Dodge van called “The Colonel” on stage. Of course it didn’t run—we had to

feet (laughs). It was entertaining and a really special moment.

Speaking of Red Rocks, you guys have been actively involved in charitable work

for quite a long time, and have often used that venue as backdrop for charity

It’s a pretty easy thing to get involved in charities. A lot of times we are

hired to support charities and at other times, like Red Rocks, we just have a

Our focus has always been on kids, so the types of charities we tend to pick out

have to do with children’s health or education.

It’s not really something that makes us that special, I don’t think. We don’t

really make a big deal out of it. My personal opinion is that the best charity

you can do is to be good at what you do, whatever that is. Like I said, it’s an

easy thing for us to do, and we love doing it. We consider ourselves

evolved, but it’s always seemed to be a very organic evolution. With all the

different types of music that have produced hits since you guys stared, how do

you stick to your plan as band and play the music you want?

We’ve always been a little bit independent. When started our career, we started

our own label back in the late ‘80s and always felt that our independence was an important part of our career. I think we have always evolved naturally and on

our own trajectory. The industry is done, in a way. A lot of the industry

with file sharing and that sort of thing.

Musically, I’m not really that cognizant of different directions that the

Springsteen. I’ve always kind of had a similar tool set as far as what I was

interested in and wanted to achieve as a musician.

Hopefully, our trajectory has been along the lines of being true to our roots.

Sooner or later we’re going to intersect yet again with popular culture maybe, or

maybe not. (Laughs) I guess we’ll see, but our fans love us either way.

It seems that you’re as much of a fan and a historian as a musician. There’s

little doubt that’s had a significant influence on your own music. How does

being a fan by those musicians translate into the sound you have evolved into?

Firstly, what I like about all those guys mentioned is that they’re all word guys

and I’m a word guy. I’m really fascinated and interested in music because it’s a

format for poetry. So that part of the art is something that has always intrigued me:

to be able to say something that is get-able and quick. You don’t have a lot of

words, so you need to pick them carefully in songwriting. That’s the part of the

But also, as I mentioned the influence of soul and R&B is there, but also on this

album in particular [Rocksteady], there are a lot of Caribbean influences. I’m

fascinated by how rock and roll and contemporary music came to be what it is.

Certain periods of music have always stuck out to me as being seminal, so I keep

those pretty close to the vest.

album, Rocksteady. I understand the album was recorded in Colorado, which is

Being at home in Denver, we recorded at our keyboard player Jeremy Lawton’s

studio, which is about ten blocks from my house. Overall, it was really relaxing

right. We went in and started out with about thirty songs and spent our time with

each one and had the liberty to try different things. Somewhere in the middle of

the process we decided to split up things into a couple more focused albums.

I always wanted to make kind of an R&B album–it’s always been a fantasy of mine.

That’s the direction that we went with Rocksteady. It is the most focused

collection of songs we’ve ever put out on an album. Instead of being all over

the map, it’s a more light-hearted, fun, party album. As I said, it has a pretty

heavy strand of rhythm and blues and Caribbean influences that run through it.

As you mentioned, keyboardist Jeremy Lawton produced the album. What made you

guys make the decision to have him produce the album, rather than bringing in

great experiences. We worked with Jerry Harrison of Talking Heads, David Z [an

There are a lot of good things producers bring to projects. One of the things I

struggle with is the pressurized timeframe. Studios are expensive and producers

are expensive and they have other projects before and after your project.

Generally, what I find is that it is more of a cookie-cutter type of experience,

where there is less time for experimentation or trying things a different way.

That’s the big thing that I found useful out of this process with Jeremy, just

having the liberty and the time to follow every road. That can be a big problem

also, if you don’t have enough focus to get everything together. (Laughs) That’s

why a lot of bands in a lot of situations need a producer. But I think that,

collectively, we had so much experience with producers; I had produced a couple

of our records myself and Jeremy has produced a lot of records, also. I think we

felt like we had enough producing chops between us to pull it together.

This album features a cover of The Rolling Stones’ “Beast of Burden,” a song that

has been a staple for you at live shows. Why did you guys decide to include that

song on the album now, instead of in years past?

A couple things, really. For one, my wife, that’s her favorite song that we do.

recording a bunch of covers to have a covers program, like a monthly cover. We

did a half a dozen songs or so and realized, they were pretty fine. They weren’t

like second-rate songs for the band. But “Beast of Burden” was just really

special, it had such a slinky-soul vocal. It just seemed to fit right in with the

rest of the songs on Rocksteady.

So far, Rocksteady has been met with a lot of praise. With that being the case,

To our delight we’ve already had really great success with our single,

“Beautiful.” It’s done better at radio than any one of our tracks since "Sister

Sweetly." We’re starting to see a rejuvenated career already from how well the

song is doing on the radio.

iTunes and Pandora, it seems to be a much more single-oriented market.

Our goal is always to add new life to our career with new music. Hopefully, our

to come see the band again. So new music for us is our way of staying relevant

and pushing our art forward. Whatever happens in addition to that is just gravy,