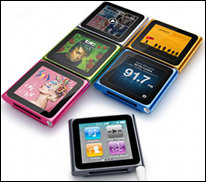 ARLINGTON, VA (Hypebot) – The music industry got at least a sideways bump on Black Friday as mp3 players remained among the season's most popular gifts.  No specific numbers were released, but mp3 players along with video game consoles and computers including tablets were among the top 3 most popular electronic purchases, according to interim results from the Consumer Electronics Association's Black Friday Survey.

"The MP3 market is dominated by iPods," according to a CES spokesperson. "And the iPad right now has 95% market share in the tablet category." 58% percent of Friday’s shoppers bought some type of consumer electronic product, second only to clothing, according to interim results from the Consumer Electronics Assn.’s Black Friday Survey. That's up slightly from 54% buying electronics last year.

Independent music stores worked to bolster their sales with a variety of exclusive offerings. And online retailers like Amazon and iTunes have included music in their Cyber Monday sales with discounts like this Amazon digital coupon for $3 in free mp3s. Download and CD sales figures will be released next week.