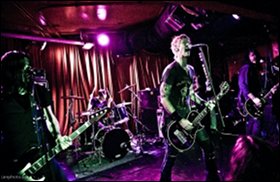 The new studio album, The Soundtrack, from Duff McKagan’s band Loaded was recorded by Terry Date (Slipknot, Soundgarden) and will be released March 2011. A re-issue of their 2009 CD Sick with bonus DVD will follow in April.

“Eagle seems to get the hard work ethic of Loaded,” said Duff. “I am proud to have such an excited partner as [them].”

Two tracks from the upcoming CD, “We Win” and “Fight On,” are currently digitally available.

“Fight On” draws inspiration from military veterans, and gives back via proceeds from the song’s downloads, which go exclusively to the Puget Sound Healthcare System veteran administration according to the press release.

Also on the horizon for the band is the film feature Loaded, a rock ‘n’ roll odyssey in the vein of The Beatles “A Hard Day’s Night” and Led Zeppelin’s “The Song Remains The Same.” Set in the contemporary landscapes of Seattle and the Pacific Northwest, Loaded is a series of “vignettes” which explores the lyrical content of the band’s upcoming studio album, all tied into a storyline that’s part documentary and part live performance.