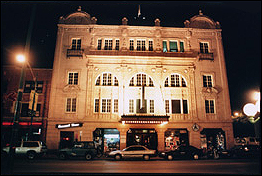 CHICAGO (CelebrityAccess MediaWire) — Promoter C3 has been making strides in the Chicago market, with their highly successful Lollapalooza and the recent pacts with the city over Soldier Field and the Congress Theater and many local competitors are taking notice.

Recently, Chicago Sun-Times music critic Jim Derogatis gave space for some of Chicago's top club owners to opine about the influence of C3 on the business.

Joe Shanahan, owner, Metro: "It's a very different summer now for all of us. I look at those Lolla bills, and I know they're paying so many of those bands really well. It may not be the career moves that all of them should be making, but I'm not their manager or their agent. I'll still be standing in the fall, and they'll come back to work for us then or in the winter. But the shift has definitely been to the other seasons because of this."

The rise of the summer festival and the impact on the pricing and availibility of artists seems to be the primary concern for many talent buyers, even those with heavy backing.

Michael Yerke, talent booker, House of Blues told the Sun-Times that: "There's no doubt about it: If Lollapalooza wasn't there, there would be more shows at places like Metro and the House of Blues and the Vic Theatre and probably for that matter Reggie's. On the other hand, we have a good relationship with those guys [Lollapalooza promoters C3 Presents], and we do a couple of the after shows. At least we're getting a couple of shows during that weekend, where if we didn't have a relationship with them, we'd probably have no shows at all! It's hard, but Lollapalooza isn't the only culprit: You also have the Warped Tour and the Linkin Park tour that swallow up a lot of bands that take away from Metro and House of Blues as well."

Do you have an opinion to share on this? Feel free to drop us a line. – CelebrityAccess Staff Writers