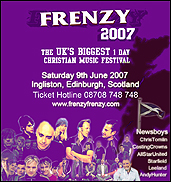 EDINBURGH, Scotland (CelebrityAccess MediaWire) — Frenzy, one of the largest one-day Christian music festivals in UK, has already announced the date and impressive line-up for 2007.

The festival debuted in 2005, attracting a crowd of over 5500. Since then, the festival has set a new standard for Christian music events in Scotland. The first line-up featured top Christian bands like Delirious?, Third Day, The Newsboys and David Crowder Band among other.

The aim of Frenzy is to 'deliver a potent blend of faith and a festival atmosphere’.

Tickets to the event at Edinburgh's Highland Hall in 2007 are already on sale, with a discount available to those who buy theirs before 2 March. Before the cut-off date tickets cost £18 for under 16s and £23.50 for adults, with prices going up to £19 and £29 thereafter.