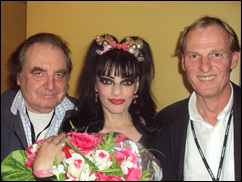 Nina Hagen and Georg Leitner are presently putting on a tour with Nina Hagen that covers Spain, France and Russia. Spring 2010 Hagen will release a new album and book – titled "Confessions".

Hagan’s manager Alex Grob was previously the manager of groups such as Emerson Lake and Palmer and lately Nena from Germany, who Borg brought to arena Levels.

GLP Artist Marketing remarked “Together with Alex Grob we have devised a strong marketing strategy that will be implemented on a worldwide basis that will raise the market potential of this distinguished artist to a great level! GLP is proud to be involved with such a distinguished artist and we look forward to a wonderful cooperation!” –by CelebrityAccess Staff Writers