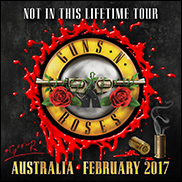 According to Tone Deaf, the band was also the first international act to sell out the Melbourne Cricket Ground, selling 74,000 in that market alone. In Sydney, more than 85,000 across two nights watched the band perform.

The Australian visit was the first for the band in decades.

“Guns N’ Roses has a huge fan base in Australia, but I would say it’s now bigger than ever after this fabulous tour,” promoter TEG Dainty's Paul Dainty said in a press statement. “Every night the band delivered its trademark sound and performance. I can’t speak highly enough of their professionalism and passion. We would love to see them back soon.”

Guns N’ Roses Not In This Lifetime Tour attendance figures