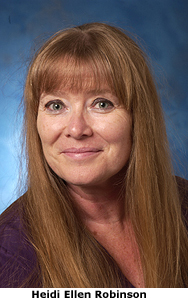 In her new post, Robinson will design and implement media campaigns for all facets of the company, including ARTISTdirect Corporate, ARTISTdirect Records and its roster, ARTISTdirect Talent Agency, and all special projects that the company undertakes such as the SnoCore and Fan Nation touring events. Robinson will report directly to Ted Field and Marc Geiger.

"Having worked directly with Heidi for years on many projects," said Geiger, "I know first hand how valuable she is as a media strategist. To me, when I look up the definition of great PR in the dictionary, Heidi's picture is in the caption."

"Heidi's background shows her to be an innovative and creative publicist," added Field, "and we're excited about the unique contribution she'll make to the company."

Robinson's music business experience spans more than three decades. Over the past year as a freelancer, she created and ran the media campaigns for System of a Down, Slayer, American Head Charge, and Deftones. Prior to that, she was head of media relations at Maverick Records (1998-2000) and spent seven years (1991-1998) as vice president of media relations at Rick Rubin's American Recordings where she was responsible for press campaigns for Rubin, The Black Crowes, Johnny Cash, The Jayhawks, Sir Mix-A-Lot and the Red Hot Chili Peppers' "BloodSugarSexMagik" project. Robinson also designed and implemented the PR for the first five Lollapalooza festivals, in addition to handling Jane's Addiction's 1997 "Relapse" project.

Robinson has also spent time as an independent publicist and a publicist at Warner Bros. Records, Capitol Records and Columbia Records.