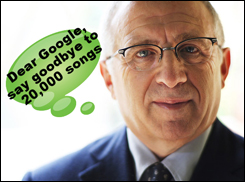 (Hypebot) –
After months of contentious negotiations, yesterday was finally Google's day in the music business spotlight with launch of both a new home for music on YouTube and its Music Key subscription service. But mega-manager Irving Azoff, who recently added performing rights advocate to his resume, had a different plan. After all, The Eagles, Pharrell Williams, John Lennon and the writers of the 20,000 songs that Azoff reps had not signed any new deal with YouTube.

Azoff told The Hollywood Reporter that he is prepared to pull 42 of his clients – which include The Eagles, Pharrell Williams, Boston, Foreigner, John Lennon, Smokey Robinson and George and Ira Gershwin catalog representing a total of 20,000 songs – off all of YouTube including the new Music Key service.


What does Azoff – who has never been afraid of a public fight – really want?

Higher royalties would be the obvious answer. But in a week when Taylor Swift vs. Spotify dominated the headlines, Azoff also sees an opportunity position himself and his Global Music Rights organization as tougher artist advocates than his more established rivals BMI, ASCAP and SESAC. It's a roll he has played for those artists in his care before.


"The way fans listen to music is evolving daily," says Azoff. "GMR is going to give songwriters and publishers an opportunity to engage in meaningful licensing for their intellectual property. The trampling of writers' rights in the digital marketplace without any regard to their contribution to the creative process will no longer be tolerated."