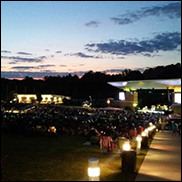 FULTON COUNTY, GA (CelebrityAccess) — Promoter Live Nation has been selected to take over operations of the Wolf Creek Amphitheater in south Fulton County.

According to the Atlanta Journal-Constitution, Fulton county commissioners agreed on Wednesday to authorize negotiations for a contract with Live Nation, over three other bidders who were competing for the contract.

Live Nation will have oversite responsible for security, communications and marketing, concessions, parking and day-to-day maintenance at the shed.

“The county staff did its homework and found that Live Nation is the gold standard when it comes to operating and promoting a venue,” Fulton County Chairman John Eaves said in a statement. “We expect the company to attract great acts to perform at Wolf Creek at reasonable prices and to keep the community involved as we move forward.”

The move to outsource operation of the amphitheater comes after an audit of the venue's finances revealed more than two dozen violations by amphitheater employees of county policies, ranging from unapproved venue employees to employees printing thousands of extra tickets, sometimes leading to oversold shows. However, the county says they had planned to outsource management of the venue before the audit. – Staff Writers