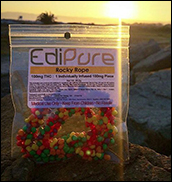 BUTLER, OH (CelebrityAccess) — A Michigan man has been arrested after more than two dozen festival attendees became ill after eating THC-laced candies at an event in Northeastern Ohio.

According to the Cleveland Plain Dealer, Matthew Gross, 28, of Ypsilanti, was arrested in connection with the incident and will likely face felony charges of drug trafficking and possessing drug paraphernalia.

According to the Plain Dealer, a woman claimed to have seen a man later identified as Gross passing the candy out and tossing it into the crowd. Police described the candy as 100mg prescription 'medibles' called Nerd Ropes that included a Michigan doctor's name on it, the Plain Dealer reported.

After Gross was identified and searched, more of the candy was found on his person, police said.- Staff Writers