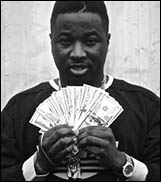 The lawsuit comes two months after Troy, whose real name is Roland Collins, was charged in connection with a shooting at the club that left one person dead and three, including Collins, injured.

Following the incident, Collins was charged with reckless endangerment, possession of a weapon, and menacing after police reviewed a video clip that appeared to show Collins firing a gun after a fight broke out in Irving Plaza's green room. In the video, Collins appears to emerge from a backstage area of the club with blood on his leg and fire a handgun in the direction of people fleeing. Police later located a gun that matches the ballistics of the weapon used in the shooting in a hidden compartment in Collin's vehicle.

Collins attorneys claim that both he and Ronald McPhatter, the man who was killed, were victims and were defending themselves and took the gun from an attacker. Police have thus far been unable to locate any evidence that there were other firearms involved in the incident.

"We made a decision that if not for their negligence, the incident would have never taken place," Collin's lawyer Scott Leemon told Billboard. "They let someone into the facility with a gun, did not pat them down and that's where this person coming in, [Troy] would never have been shot." – Staff Writers