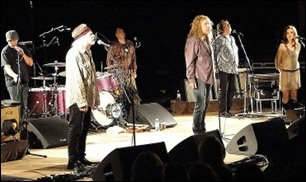 WILKESBORO, NC (CelebrityAccess MediaWire) — MerleFest 2011, presented by Lowe’s and slated for April 28-May 1, has added Robert Plant’s, Robert Plant and the Band of Joy, to the festival’s lineup.

Robert Plant and the Band of Joy’s recent album was released in the fall of 2010 and nominated for two Grammy awards.

While originally known for his work with the legendary Led Zeppelin, Robert Plant has since turned out solo albums with Jimmy Page, and recorded with bands like The Honeydrippers, Priory of Brion and Strange Sensation.

Of the group, The Boston Herald said, “The most versatile group of musicians Plant has surrounded himself with since Led Zeppelin, the band easily followed his detours into English folk, Delta blues and North African rhythms, while always helping him find his way back to his Americana foundation.”

Robert Plant and Band of Joy and the previously announced lineup of artists will join host Doc Watson on the campus of Wilkes Community College for a celebration of “traditional plus” music—a term Doc coined to describe the unique mix of traditional, roots-oriented sounds of the Appalachian region, including bluegrass and old-time music and expanded to include Americana, country, “plus whatever other styles we were in the mood to play,” Doc explained.

With this year's event hosting over 90 artists performing on 14 stages during the course of the event, MerleFest was founded in 1988 in memory of Eddy Merle Watson as a fundraiser for Wilkes Community College Endowment Corporation and a celebration of “traditional plus” music.