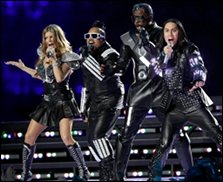 BOULDER, CO (CelebrityAccess MediaWire) — You would not believe how much the Black Eyed Peas were paid to do the Super Bowl Halftime Show.

"The traditional argument to artists and songwriters by those looking to use what they do–whether in a performance or using their music–is 'we're giving you exposure; why should be pay you?'" commented CelebrityAccess Senior Editor Larry LeBlanc.

"The argument is as old as the commercial music world and certainly songwriters are aware of the argument dating back to when sheet music was sold at the turn of the century and clubs with live music refused to pay a license for the music played in their establishments," LeBlanc continued.

According to Forbes, most Super Bowl Halftime acts aren't paid to take the stage.

"The platform that these artists are given can't be replicated," said Paul Swangard, managing director of the University of Oregon's Warsaw Sports Marketing Center, one of multiple experts who confirmed to Forbes that halftime performances are unpaid.

"It's a basic financial equation. What would you have to do as a band to have a conversation with a third of the country? I think the arrangement makes a lot of sense," Swangard continued.

The Peas received funding for the show's production as well as free travel for themselves and their staff according to The Hollywood Reporter.

While reactions to the Peas' performance were mixed, sales are on the up.