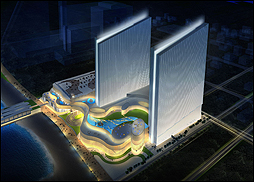 ATLANTIC CITY, N.J. (AP) -— Morgan Stanley said Thursday it is pulling out of the $2 billion Revel casino in Atlantic City and is prepared to take "a substantial loss" on the stalled project, into which it has already sunk $1.2 billion.

The company, which owns more than 90 percent of the ocean-themed casino-hotel project on the Boardwalk, did not list a reason for abandoning the project.

But looming next week is a demand from New Jersey casino regulators that top Morgan Stanley officials submit voluminous personal and financial information to enable the state to determine if they would qualify to hold a casino license.

In a filing with the U.S. Securities and Exchange Commission, Morgan Stanley said it will seek to sell or auction off the project.

The filing said the company's directors on Wednesday "authorized management to proceed with a plan of disposal for Revel Entertainment Group, LLC," a subsidiary of Morgan Stanley. "The company will consider various alternatives to effect the full disposition of Revel, which may include a direct sale to a third-party or an auction process."

The company said its total investment in Revel is $1.2 billion.

"It is anticipated that the disposition of Revel will result in a substantial loss of that investment," the global financial services company said.

But Revel Entertainment's chairman and CEO, Kevin DeSanctis, told The Associated Press the project will still get built.

"The key is to ultimately figure out who will end up with that equity piece, whether it's Revel, Revel with a partner or someone else," he said. "We'll continue everything we're doing, working on the financing. My total focus is on getting this project done."

Morgan Stanley's announcement came a day after DeSanctis said Revel was "very close" to a deal with China's Export/Import Bank to secure the remaining $1 billion needed to finish the half-built project.

"There is a change if Morgan Stanley is not in the mix," he said. "We've got to sit down and work through this with the bank."

He said Morgan Stanley "has been a terrific partner" but "Morgan Stanley is not in the gaming business; that's not what they do."

Revel ran out of money in January 2009, laid off 400 workers and stopped work on all but the exterior of the project until it could find money to do the inside.

The casino and its 2,000-room hotel are widely seen as crucial to Atlantic City's efforts to compete with slots parlors in neighboring states, which soon will offer table games that threaten to further erode New Jersey's one-time monopoly on East Coast gambling.

Revel, begun in 2007, just before the national recession hit and credit markets dried up, has been beset by problems, including the deaths of three key executives in a plane crash, its inability to secure funding to finish the project and a public backlash against a state tax break it is seeking that could be worth as much as $350 million over 20 years.