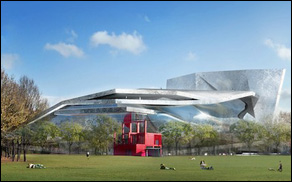 PARIS, France (CelebrityAccess) — After eight years and $455 million, a new, ultra-modern concert hall opened on Wednesday near Paris, but not without some controversy in the city's arts community.

Designed by leading French architect Jean Nouvel, the 2,400-seat La Philharmonie was inaugurated by French President François Hollande and the Orchestre de Paris, who performed the Requiem by the French composer Gabriel Fauré in commemoration of the victims of the terrorist attacks that shook the nation last week.

The location of the Philharmonie on the edge of the Parc de la Villette, in the 19th Arrondissement, a working class neighborhood, has been a matter of some debate with many in the city's arts community expressing frustration that the building is so far from the cultural heart of Paris.

“I and many other people don’t like the idea of schlepping out to the edge of Paris,” said Michael Saklad, an American business strategist living in the city told the New York Times. “What we resent is a government institution turning a deaf ear.”

However, hall officials hope that the location might help to entice a new generation of classical music fans and currently, the hall plans to sell tickets much more cheaply than at other classical music performance spaces in the city. Yet, that outreach effort might have an opportunity cost. Paavo Jarvi, music director of the Orchestre de Paris, told the New York Times that the orchestra's subscription base is strong in the middle of Paris and that the move might present some challenges in maintaining its current audience.

“Sometimes it is hard to convince people to take the leap because it is inconvenient,” he told The Times. “But on the other hand, it will be a magnificent hall and, in a way, a once-in-a-lifetime opportunity.” – Staff Writers