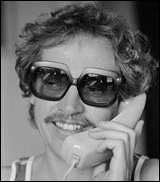 MILL VALLEY, CA (CelebrityAccess) — Bill Thompson, longtime manager of the Jefferson Airplane and its spinoff bands the Jefferson Starship and Hot Tuna, died of a heart attack on Monday at his home in Mill Valley, California, according to the San Jose Mercury News. He was 70 at the time of his death.

A native of Oklahoma City, OK, Thompson moved to the San Francisco Bay area for college but after a stint at the San Francisco Chronicle, Thompson eventually found himself replacing legendary promoter Bill Graham in 1968 as the manager for Jefferson Airplane.

Under Thompson's guidance, the band secured their financial situation and launched Icebag Corp, a music publishing company to oversee the bands works, as well as acquiring a sprawling Victorian"Black Mansion" in San Francisco to serve as a communal home and office for the group.

After Jefferson Airplane split, Thompson continued to manage the offshots, Jefferson Starship and Hot Tuna and Starship. As well, he continued to rep the groups in the realm of music publishing.

"I was driving to Lexington, Kentucky this morning for a gig, when I received a sad call. My old colleague, Bill Thompson, passed away this morning in California. At seventy four years of age, I have spent most of my life since my twenties on the road and in the beginning when Jefferson Airplane was starting to fly, our constant companion was Bill Thompson. He was with us when we started and wound up being our manager in the years before Jack and I left and the Airplane was retired to the hanger. Because of the way we did business back then, Bill was like a band member… his instrument were his phone, his desk and his voice. He was one of us," said former Hot Tuna and Jefferson Airplane guitarist Jorma Kaukonen in a comment on Relix.com. – Staff Writers