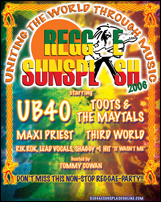 LOS ANGELES (CelebrityAccess MediaWire) — After nearly a decade hiatus, Reggae Sunsplash is back and bigger than ever, and set to tour the U.S.A. this summer. Continuing its motto of "Uniting The World Through Music," the talented line-up includes UB-40, Maxi Priest, Toots and the Maytals, Third World and Rik Rock and kicks off August 10, 2006, in West Palm Beach Florida running through Labor Day.

According to tour co-producer TJ Johnson, son of the late founder Tony Johnson, "We are here to celebrate the great sounds from the Island of Jamaica and honor the memory of my dad’s efforts in bringing the music and message to people of all races, creeds and color." Adding, “Sunsplash has always been about spreading the message of ‘Jah,’ one-love, peace and harmony across the continent and around the globe – and now that will continue.”

This year’s tour is being co-produced by the Johnson family and Toby Ludwig of 21st Century Artists, Inc. Toby was Johnson’s agent at William Morris and worked closely with him for many years thereafter.

The late Johnson, who was born in Jamaica, and schooled at UCLA in Southern California, raised his family in Southern California. He returned to the Caribbean Island in 1978 to produce Reggae Sunsplash and brought mini versions of the multi day mega-festival to cities around the world – until his untimely passing nine years ago.

Said Chris Blackwell, chairman of Island Records, "Tony was a great pioneer in bringing reggae music to the rest of the world.”

Now, the artists themselves have rallied behind the new spirit and energy carried on by the Johnson family.

As in the past, the festival will be hosted by the voice of Reggae Sunsplash, Tommy "Yes Indeed!" Cowan. And, the Sunsplash experience will be rounded out by Jamaican food and crafts fairs, selling everything from "jerk" chicken and Red Stripe beers to intricate wood carvings and hand crafted clothes. Says Cowan, "The feel and flavor of the Caribbean Island of Jamaica shall engulf us all."

The Reggae Sunsplash 2006 tour is being booked by APA's Troy Blakely, who can be reached at troyb@apa-agency.com. The full tour itinerary is as follows: