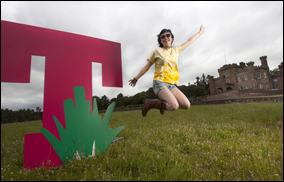 PERTHSHIRE, Scotland (VIP NEWS) — T in the Park festival is to move to Strathallan Castle in Perthshire after being held at Balado for the final time next month.


It comes after "substantial" concerns were raised by health and safety inspectors about an oil pipeline which runs underneath the site, near Kinross.


Top acts this year will be Biffy Clyro, Arctic Monkeys and Calvin Harris.


Festival organizers DF Concerts confirmed that the festival would be held in the grounds of the early 19th century Perthshire castle, near Auchterarder, from next summer.


Chief executive officer Geoff Ellis said that while he was sad to leave Kinross he was "absolutely thrilled" with the festival`s new home.


He said: "We`ve had 18 tremendous years at Balado, but now we`re moving on to pastures new – this time with a castle overlooking the site.


"We already loved Strathallan Castle and had been hoping to host an event there for many years.


"When it became clear we`d need to leave Balado to safeguard the future of the festival, we became very excited about the prospect of Strathallan becoming the new home for T in the Park. We thought it would be perfect, and it is."


The Health and Safety Executive (HSE) wanted the festival to move from Balado because part of the site runs over the Forties Pipeline, which carries North Sea oil south to Grangemouth.


HSE said an accident at the pipeline could cause "a large number of casualties" and result in people receiving "a dangerous dose of thermal radiation".


DF Concerts had originally looked at redesigning the festival site away from the pipeline, but have now resolved to move across Perthshire.


Perth and Kinross Council`s licensing board is due to meet on the issue of policing for the festival on Thursday.


The local authority has also been urged to carry out a traffic assessment of local access roads ahead of the move to Strathallan Castle.