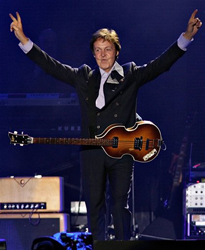 JERUSALEM (CelebrityAccess MediaWire) — There is no credible threat against Paul McCartney ahead of his concert this month in Tel Aviv, according to Aaron Klein, a terrorism expert and author who called Palestinian terrorists about the former Beatle.

An Islamic militant leader in Lebanon had warned McCartney could be the target of a suicide bombing unless he canceled his first concert in Israel, scheduled for Sept. 25, Britain's Sunday Express reported this weekend.

But Klein, WorldNetDaily's Jerusalem bureau chief and author of the book, Schmoozing with Terrorists, said in response to the threat he called senior leaders from every major Palestinian terror organization, and not one had heard of McCartney or the Beatles.

Klein said he proceeded to sing to the terrorists top Beatles songs, including "Yesterday," "Let It Be" and "She Loves You," but the tunes didn't ring a bell for a single one.

"I don't know any of this," said Muhammad Abdel-Al, spokesman and senior leader of the Popular Resistance Committees terror group.

Ala Senakreh, chief of the Al Aqsa Martyrs Brigades in the West Bank city of Nablus, told Klein he, too, is unfamiliar with the star singer and his former group.

"Listen, I have a friend at the University [of Nablus]. I can call him. Maybe he knows of McCartney," Senakreh told Klein.

Senakreh recently was granted amnesty in a deal between Israel and the Palestinian Authority.

Klein said he also called members of Hamas, the Popular Front for the Liberation of Palestine and a lesser-known group, the Army of Islam. Those terrorists also drew blanks when asked if they were familiar with McCartney.

The threats against McCartney came from Omar Bakri, also known as Omar Bakri Mohammad, who was the leader of Al-Muhajiroun, a London-based Islamist organization with the stated goal of creating a worldwide Islamic state starting in Britain.

"If he values his life, Mr. McCartney must not come to Israel," Bakri was quoted as saying. "He will not be safe there. The sacrifice operatives will be waiting for him."

Bakri added: "Instead of supporting the people of Palestine in their suffering, McCartney is celebrating the atrocities of the occupiers. The one who is under occupation is supposed to be getting the help."

Klein has interviewed Bakri numerous times. In 1999, Klein spent a weekend with Bakri and his group, penning an article entitled, "My Weekend with the Enemy," published in newspapers, including the Jerusalem Post and Pittsburgh Tribune-Review.

He said Palestinian terror groups "pay little to no attention to anything Bakri says or does. They don't take Bakri seriously."

Meanwhile, McCartney has made clear his concert in Israel will go on as planned. –by CelebrityAccess Staff Writers