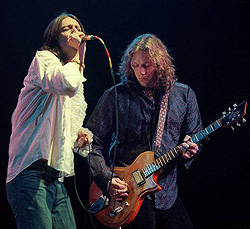 (CelebrityAccess MediaWire) – The Black Crowes have announced plans to reform with a return to the live stage for a run of shows at New York’s Hammerstein Ballroom beginning on March 22nd. The five shows, booked as “All Join Hands” by brothers Chris and Rich Robinson, will be the band’s first live appearances since October 31, 2001.

The five show run will feature a different special guest opener hand-picked by Chris and Rich: John Butler Trio (3/22), The Bees (3/23), The Soundtrack Of Our Lives (3/25), North Mississippi Allstars (3/26) and Ben Kweller (3/27). Pete Angelus, longtime manager of the band, will not give information any plans beyond these shows. “Regardless of the speculation, we are going to see how these shows at The Hammerstein evolve before giving any further consideration to additional shows,” says Angelus in a statement on the band’s website.

When the website experienced its first major changes since the announcement of a band hiatus in mid-2001, rumors began flying on message boards across the internet. The hiatus gave the brothers time to each records solo albums and tour with their own projects.

Known for their cocky rock’n’roll and roaring blues, the Black Crowes have proven themselves, in their own words, as “The Most Rock ‘N Roll Rock ‘N Roll Band In The World.” Since their debut in 1990, they have never failed to cause a scene on or off stage, always pleasing their solid fan base with new and ever-evolving music, as well as always pleasing the media with their off-stage antics and occasional brotherly brawl. The band hit a milestone in touring, playing over 2000 shows in their 11 year run, prior to the hiatus. Their gigs became legendary for changing their set lists nightly and signature blues explorations and jams. The Black Crowes are one of the few contemporary bands who have shared the stage with such icons as Jimmy Page, Bob Dylan, The Rolling Stones, Aerosmith, AC/DC, The Who, Neil Young, and The Grateful Dead. –by CelebrityAccess Staff Writers