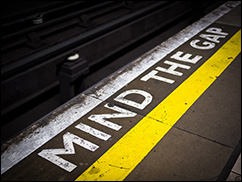 (Hypebot) –
'Value gap' has recently become a popular buzz term in the recording industry when describing the disparity in payouts from various streaming services, and in particular to demonize YouTube. The concept is largely inaccurate, however, and its perpetuation could be harmful to both the music and tech industries.

Over the past few months, the legacy recording industry has coalesced around a new talking point — a so-called "value gap" between different kinds of music services. In particular, the phrase is used to attack YouTube and to claim that it's somehow unfair that the ad rates and money made from the ad supported YouTube is much lower than purely subscription services. This has lead to the repeated false claim from the RIAA and others that revenue from vinyl records is more than from ad supported streaming.

Unfortunately, this value gap phrase has caught on in certain circles — including over in Europe where the European Commission has mentioned it as it puts in place plans for copyright reform. Tragically, and incorrectly, EU officials have started referring to reasonable intermediary liability protections and other things as a "loophole" within copyright law that somehow allows platforms to "unfairly benefit." It allows them to claim that they're just trying to "level the playing field" when that actually means tilting the playing field heavily in one direction.

Maud Sacquet, from CCIA and Project Disco, has a good blog post about why this concept of the value gap is so problematic. As she rightly points out, differentiated pricing in music is not a new concept:

The claim that this difference is “unjustified” or somehow “unfair” should be challenged. The music industry’s revenues have always differed depending on the sources (i.e. the sales of sheet music and phonograms, live performances, radio and TV broadcasts). Online services have become additional sources of revenue, with different business models and technologies generating different incomes – reflecting the current situation in the offline world.

And that's true, but even that underplays the reality of the situation — which is that there are good reasons for differentiation here. It's not just about differences in sources, but differences in how people consume music and the money that changes hands reflects that. Terrestrial radio is free and ad supported — and it's an easy low-barrier entry point for people who aren't necessarily huge music fans. Then as you travel up the ladder of musical fandom, and people get more committed, they may use a subscription service, or have their own locally stored music.

Sacquet further points out how the ideas that the EU is apparently considering would create a massive disaster for internet services that provide platforms for music:

Among the potentially very harmful measures considered by European policymakers to solve this “value gap” is the “clarification” of the right of “communication to the public” – i.e. both user and online hosting services would be “communicating to the public” each time a user is uploading a content online. Online platforms, today only indirectly liable for copyright infringement, would become directly liable. All online hosting services would de facto fall outside of the scope of the liability protection regime of the E-Commerce Directive.

Such a measure would have far reaching consequences.

Firstly, it could cause online services to shut down their upload and sharing services, thereby chilling innovation.

Secondly, this would severely restrict users’ freedom to impart and receive information, something that policymakers have struggled to grapple with in the past.

Thirdly, it could cripple the growth of the digital economy – when the purpose of the Digital Single Market is the exact opposite.

But, perhaps even more importantly, is that it would end up harming the very musicians clamoring for such a solution. We're still in the very early days of figuring out how music services should best work online. The whole concept of the "value gap" and "leveling the playing field" really are all about deciding that there is "one true business model" for all music services to live under, and EU technocrats (heavily pressured by the legacy recording industry) are going to tell the world what that is. That's a recipe for disaster not just for the tech sector, but the very musicians who rely on these services to make money today.

Most importantly, they will completely lose out on the differentiated ways in which fans enter the music ecosystem. When you have a one-size-fits-all model, it pushes towards a world where the vast majority of casual music fans are left out, in a misguided effort to try to force more money out of stronger music fans. Years ago, music economist Will Page pointed out that the industry was wrongly focusing on share of wallet that they were able to extract from people, rather than trying to expand the population that was listening to music and contributing to the music ecosystem in some way. That is, there's a large percentage of the population that doesn't support the music ecosystem in any way. They don't subscribe to anything. They don't go to concerts. They're casual music listeners at best. And there's a real opportunity to offer low barrier entry points to those people, allowing them to "move up the ladder" to become bigger and bigger music fans.

But you lose all of that with a forced "level playing field." The "value gap" is not a value gap at all. It's simply showing differentiated pricing to help bring in more casual music fans and create new opportunities going forward. So the end result here would be not just harming technology companies and leading to fewer services with less innovation, but, even worse, a significantly smaller population of music fans who are willing to support the industry — and the ones who remain will be getting squeezed harder and harder by the industry, eventually probably shoving many of them out of the market as well.

The talk of a "value gap" is not only misleading and wrong, but it's dangerous. And it's dangerous to both internet services and musicians — which shouldn't be a surprise because, despite all the rhetoric, the two are pretty closely aligned in their overall interests.