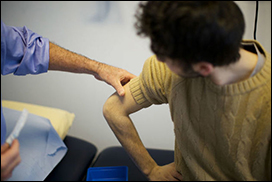 According to statistics collected by the organization, there were 234 cases of measles confirmed between January and June 2016 compared with just 54 over the same period the previous year. More than 35 of those cases were found in people who went to public events like festivals in June and July — the main festival season during the English summer.

The cases were reported at festivals including Glastonbury, where 16 cases of measles were identified, as well as Noisily Festival and the Secret Garden Party.

The organization reminded teenagers and young people to make sure they are up to date on their vaccines before attending festival events.

"Measles is a highly infectious viral illness that can be very unpleasant and sometimes lead to serious complications. So, if you think you might have measles, please don’t go to any of these big events. Measles isn’t common these days because most of us are vaccinated, but young people who missed their MMR jab as children are vulnerable, especially if gathered in large numbers at an event. If you think you’ve got it, call your GP or NHS 111. Please don’t turn up at the surgery or at A&E as you could infect other patients," Dr Mary Ramsay, Head of Immunisation at PHE said.