VICTORIA, NSW (CelebrityAccess) — A Victoria music festival that was to feature Cold Chisel, Birds of Tokyo and Magic Dirt, has been canceled due to poor air quality from ongoing brushfires in the area. 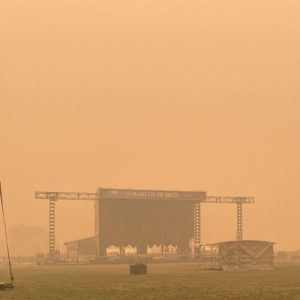 The festival, A Day on the Green, was scheduled to take place on Tuesday, January 7th at All Saints Estate in Rutherglen.

In a statement, Roundhouse Entertainment promoter Michael Newton said that they canceled the event due to “hazardous” air quality at the festival site and in the surrounding areas.

“We have been on-site for the past week preparing for the show, and sadly we have seen the air quality deteriorate to a level where we have been advised that it would not be safe to proceed. We are also concerned about traffic, given the fires in the area. This is a really unfortunate situation. We do not cancel shows lightly, and we are devastated that we have had to cancel what would have been our first show for 2020,” he added.

Other events on Cold Chisel’s Blood Moon Tour, including sold-out shows at Rochford Wines, Yarra Valley on Friday and Mt Duneed Estate, Geelong on Saturday, will take place as planned.

The cancellation follows news that the Falls Festival in Lorne, which had been scheduled to take place over the New Year’s holiday, had also been canceled due to extreme weather conditions.