LOS ANGELES, CA (CelebrityAccess) – WHAT A MESS. In case you’ve been living in a yurt for the past six months without any internet access, let me catch you up to speed.

Ye (fka Kanye West) was married to Kim Kardashian for approximately eight years and they have four children together, North, Saint, Chicago, and Psalm. Last year, Kardashian filed for divorce from the megastar rapper and just last week was legally declared single as they continue to hash out the divorce settlement details. After an appearance on Saturday Night Live (SNL), Kardashian moved on to date SNL star, Pete Davidson and Ye hasn’t taken kindly to that development.

After months of social media posts regarding Davidson, Kardashian, the Kardashian/Jenner clan, Kim K’s parenting, and news about his upcoming album, it culminated when Ye released the first video from his EP Donda 2 which showed himself burying, growing roses on and finally decapitating Davidson. A second video was then released showing rapper, The Game, in animated form, attacking Davidson, pinning him down, and hitting him repeatedly.

The drama continued when Davidson’s friend, Dave Sirus posted and then deleted what are allegedly text screenshots between Davidson and Ye in an Instagram post with the title, “A Message from Pete”. Sirus is also the person who posted an official statement after the death of Bob Saget on behalf of Davidson.

The conversation first starts with Davidson sending Ye a text, calling himself “Skete” – the presumably derogatory nickname Ye has been calling him in public. What prompted the 8 am text is unknown. Davidson tells Ye to “take a second and calm down. It’s 8 a.m. and it don’t gotta be like this. Kim is literally the best mother I’ve ever met. What she does for those kids is amazing, and you are so f*cking lucky that she’s your kid’s mom.” Ye then responds asking Pete where he was, Davidson answered, “In bed with your wife.” 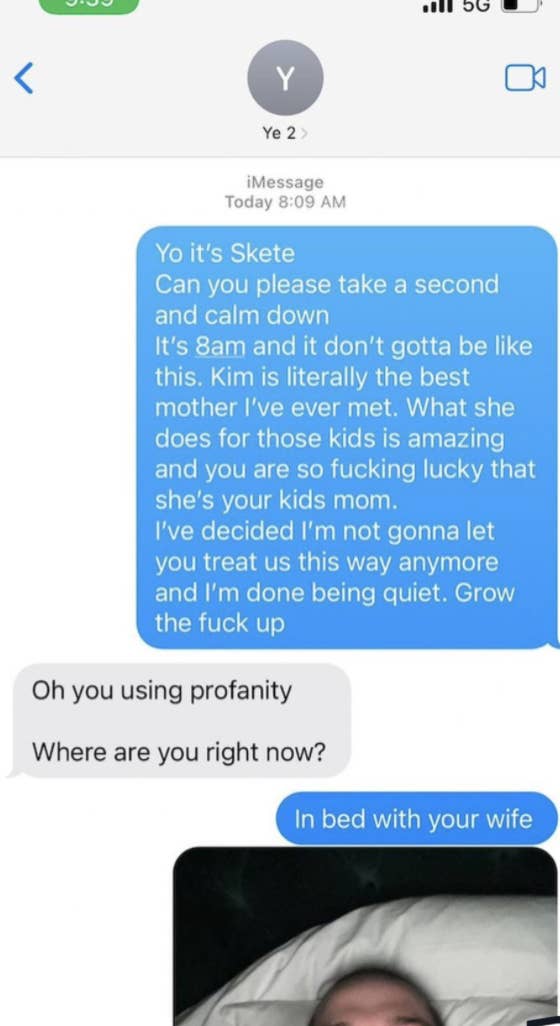 Ye then responds saying he’s “happy to see you’re out of the hospital and rehab”. Davidson doesn’t skip a beat in his response to encourage Ye to get help for himself and calls him a “little internet bitch boy”, wanting an in-person discussion. Davidson then allegedly goes on saying that Ye doesn’t scare him and how sad it is to sit and watch him ruin his legacy “on the daily”. Davidson then asks for a man-to-man discussion and Ye invited him to Sunday Service.

“I wish you’d man up for once in your life, Davidson seems to text. “Let me help you, man. I struggle with mental stuff, too. It’s not an easy journey.” He also went on to tell Ye how he’s been nice despite Ye’s actions telling SNL and several comedians to leave him out of their comedy routines, even though they wanted to make fun of him.

The texts end with Davidson seemingly sick and tired of the public drama. “If you continue to press me like you have for the past six months, I’m gonna stop being nice.”

Sirus has since deleted the post and the text screenshots, and there’s been no mention of what caused him to post them on social media. As of press time, Kim, Ye, nor Pete have commented on the matter. The drama continues ….. 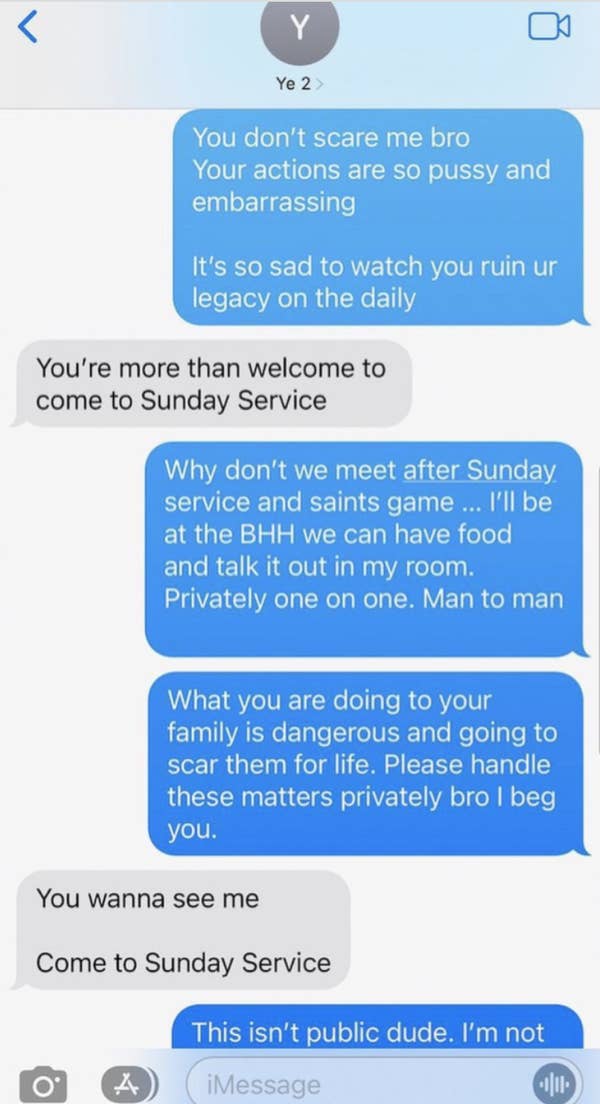 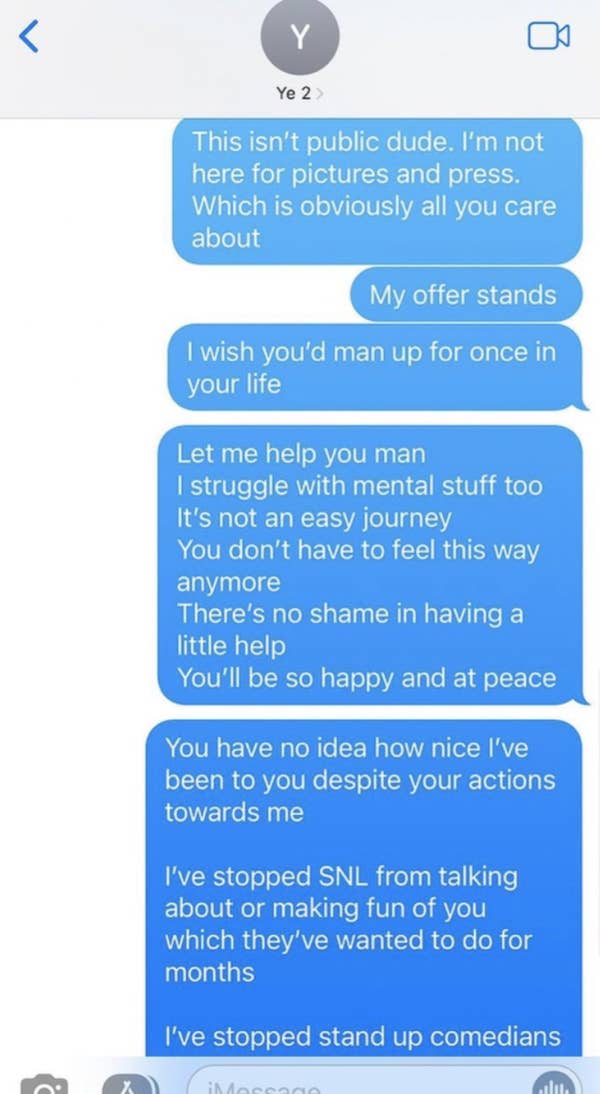 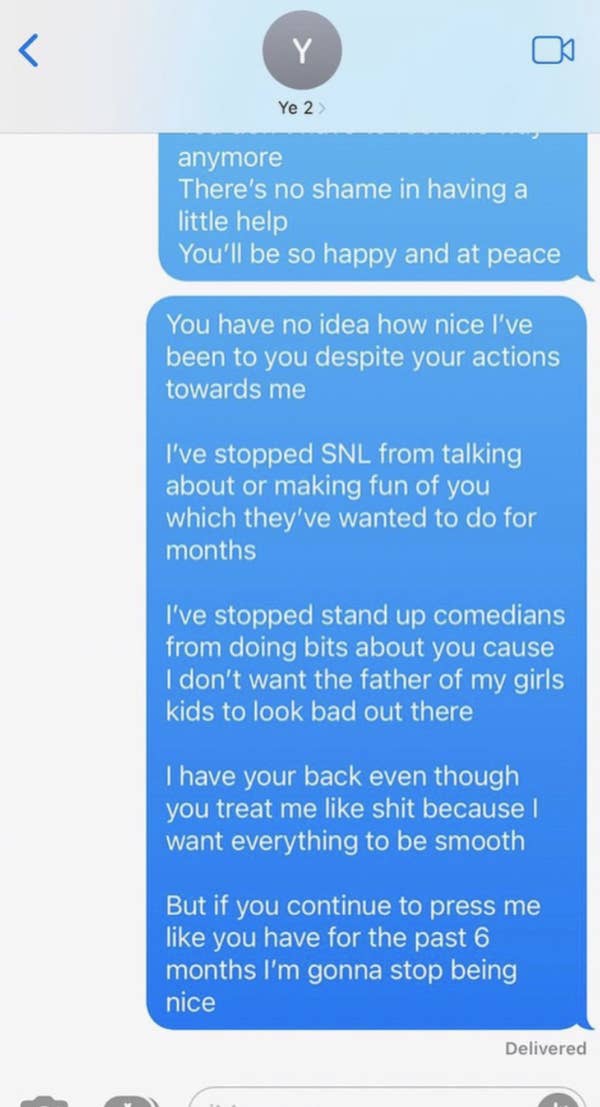