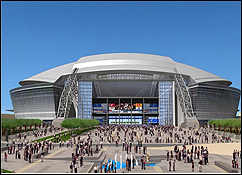 ARLINGTON, TX (CelebrityAccess MediaWire) — Dallas Cowboys owner Jerry Jones is reportedly seeking a record-setting amount – as much as $1 billion – for the naming rights to the team’s new stadium in Arlington, Texas.

Jones is already building the most expensive NFL stadium in history, which is expected to cost approximately $1 billion as well, according to the Dallas Business Journal. The high-tech, high-fashion facility is set to open in 2009.

Speculation is already pointing at a possible deal with Exxon Mobil Corp., but the team is reportedly still assembling a list of potential partners. –by CelebrityAccess Staff Writers