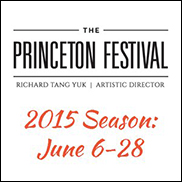 PRINCETON, NJ (CelebrityAccess MediaWire) — The Princeton Festival ( www.princetonfestival.org ) announced its 2015 season, featuring 23 music and stage performances in 11 different genres plus nine lectures and other events between June 6 and June 28 at venues throughout the Princeton area. The varied schedule includes Mozart's popular opera The Marriage of Figaro, rising country music group Striking Matches, jazz and classical music concerts, a piano recital and a workshop on and performance of Indian classical music and dance.


"We are excited to present wonderful artists in a diverse array of performances," said Richard Tang Yuk, the Festival's General and Artistic Director. "We continue to be gratified and encouraged by the loyal support of our many donors and patrons."


Mr. Tang Yuk noted that, in addition to its diverse musical and staged offerings, the Festival is continuing its tradition of free lectures by experts such as noted drama and opera translator and director Stephen Wadsworth, opera director Steven LaCosse and Emmy award-winning engineer Mark Schubin. Six different lectures are on tap.


The Princeton Festival is also sponsoring previews, workshops, a conducting masterclass and a piano competition for young artists.


Full descriptions of all offerings are available on the Festival website, with instructions for ordering tickets by phone, email or online.


This year's program offers 23 performances by outstanding artists and ensembles.