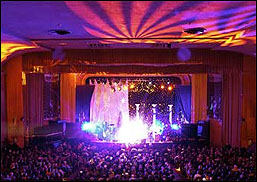 The venue will continue to operate with its existing staff and under the guidance of General Manager Judith Herbst with Roy Snyder handling talent buying.

"As we expand our national footprint, AEG Live has always valued great real estate as the anchor for that expansion," AEG Live president/CEO Randy Phillips said in a statement. "The opportunity of stewarding this beautiful theatre as we enter the Philadelphia market is a rare opportunity for a company like ours."

The 80-year-old Keswick first opened in 1928 as a combination vaudeville and movie house, quickly gaining a reputation in the region as a solid venue but eventually was devoted entirely to films. In 1980, the theatre closed its doors to prepare to demolition but was saved and re-opened by a local non-profit with the aim of restoring it to its former grandeur to operate as a performing arts center. This proved to be challenging and the theatre again closed until 1988 when it re-opened under by promoter Jack Utsick and his companies, Worldwide Entertainment and Entertainment Group Fund.

In recent years, AEG has been actively working on broadening the scope of its mid-sized regional venue offerings with the addition of places such as The El Rey theatre in Los Angeles and the Warfield in San Fran. – CelebrityAcess Staff Writers