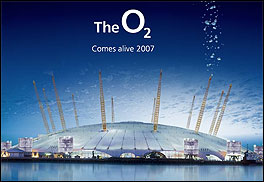 (CelebrityAccess MediaWire) — As London was chosen by the International Olympic Committee to host the 2012 Summer Games, Los Angeles-based Anschutz Entertainment Group looks set to receive a great return on their planned billion-dollar upgrade on the city’s Millenium Dome. The dome had been considered an embarrassing white elephant for the city and for Prime Minister Tony Blair, who first championed the failing facility.

“We took a huge risk and were roundly criticized in the real estate industry and in London,” AEG President Tim Leiweke told the Los Angeles Times, “and it will probably be the best project this company has ever done.”

The $1.2-billion dome, covering 1.2 million square feet in southeast London, was built by the government to usher in the new millennium in 2000. Its exhibitions exploring the human condition at the time drew much smaller than expected crowds, and taxpayers have dropped more than $54 million on maintenance costs since.

Under an agreement with the government, AEG demolished the exhibitions and drew up plans for a sports and entertainment complex inside and around the dome. The centerpiece of the new complex will be a 23,000-seat indoor arena that will host athletic and music events.

It will also include a music hall of fame, exhibition space, a music club, a 10-screen movie theater, an ice rink, restaurants, bars and possibly a casino.

The project will be named after its biggest sponsor, O2, a British mobile phone company. O2 has agreed to pay more than $11.3 million per year for naming rights.

AEG’s support of the London bid included lobbying by COO Scott Blackmun, who is a former executive of the U.S. Olympic Committee. The company also began work on the London site about give months early so Olympic officials could see progress during a February visit to the country.

“It was excruciatingly difficult but we showed them we were for real,” Leiweke told the Times.

AEG is also currently building a music club in Times Square, indoor arenas in Berlin and Kansas City and a soccer stadium in Chicago. It expects to break ground on a $1 billion entertainment district and hotel next to Los Angeles’ Staples Center in September. –by CelebrityAccess Staff Writers