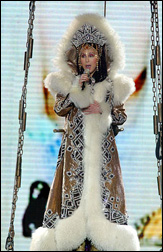 (CelebrityAccess MediaWire) — After three years, more than 3 million tickets sold and more than 3,000 costume changes, Cher will bring her long- running "Farewell Tour" to an end with a 325th and final performance on April 30 at the Hollywood Bowl in Los Angeles. Nearly 40 years have passed since Cher first performed at the venue as part of Sonny & Cher.

The show will be an Avalon Attractions/Andrew Hewitt And Bill Silva Presents Event.

Cher's farewell triumphs also include a sold-out European tour and her first visit to Russia, where she appeared in St. Petersburg as well as for two nights at the Kremlin in Moscow. Cher also performed three packed concerts in Mexico City, her first-ever shows there. In February, she heads to Australia and New Zealand for the first time in more than a decade before returning home for the finale.

NBC's televised special of her concert drew more than 17 million viewers and won three Emmy Awards, with the DVD release of that program becoming an instant chart-topper. The Very Best of Cher CD, released to coincide with the tour, has sold in excess of 2 million copies, achieving double-platinum status.

The phenomenally successful tour has grossed over $200 million and has visited stages in every state in the continental U.S. (with the exception of Vermont and Delaware, which didn't have large enough venues. The tour, promoted by Clear Channel Entertainment, will end with 4,731 pizzas consumed backstage, over 3,000 costume changes, 1,200 pairs of false eyelashes used, and over 300 birthday celebration cakes.

A portion of the money from each ticket sold throughout the tour was donated to the several children's charities, and all the proceeds from her recent Bakersfield, CA show were donated to UNICEF and World Vision for tsunami relief.

April 23 Victoria, BC Save On Foods Memorial Ctre.

–by Jane Cohen and Bob Grossweiner